After a long exhausting work week, I somehow looked forward for my Saturday to be something different and oh yeah, fun hehe.  I really needed that break or I'll really end up insane.  Well true enough, my weekend got a tweak when I received an invite from Solar Entertainment to the press conference of the American Idol Live! Tour 2011 in Manila Hotel!  But wait, this is not yet the story about that hehe.  =)

I'm posting this first as I can't wait but share with you the excitement and fulfillment I experienced earlier.  Finally, the first international celebrity to pose for Tatak Digitista is no less than 2011's American Idol himself Scotty McCreery!   Yes, I myself can't believe with this rare chance, but the AI guys, including Scotty of course, are really fantastic and friendly!  It was really a fun encounter!  And I bet, with this kind of attitude, these folks will go a long way!  =) 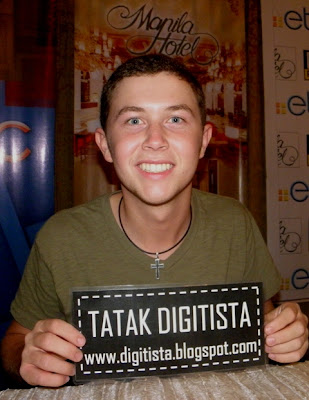 Scott Cooke "Scotty" McCreery (born October 9, 1993) is an American singer from Garner, North Carolina who won the tenth season of American Idol on May 25, 2011. His mother works as a realtor. His father was born in Aguadilla, Puerto Rico to a Puerto Rican mother from San Juan and an American father. He used to impersonate Elvis as a child, and started learning guitar at age ten. He attended West Lake Middle School and sang at his graduation. He also attended Garner Magnet High School where he joined a vocal ensemble, Die Meistersingers that performs across the United States. He started out singing tenor but switched to bass when his voice turned lower in his sophomore year. McCreery auditioned for the tenth season of American Idol in Milwaukee, Wisconsin. The judges were struck by his deep bass voice unusual for his age. At age 17, he is the second youngest Idol winner behind season 6 winner Jordin Sparks. Scotty’s coronation single "I Love You This Big" entered the Billboard Hot Country Songs chart at number 32, becoming the highest debut for a debut single since the chart converted to BDS data the week of January 20, 1990. The song sold 171,404 units in its first week. He is signed with Mercury Nashville Records and will release his debut album this October. 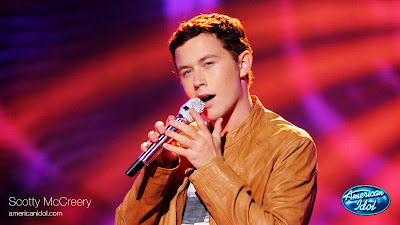 Catch American Idol's Top 11 in SM Araneta Coliseum this coming September 20 and 21.  For reservations and inquiries please visit any Ticketnet outlet (call 911 5555) or online at www.ticketnet.com.ph

By the way, Tatak Digitista's full story is coming up next, oh wait.  Before that, another post is coming up first which I think you'd like!  Hehe.  Please click the link below.  =)