Ang ineeeetttt!!!  (It's so hot!!!)  I bet right here in the Philippines, this is the most common line today!  The scourging heat and humidity challenge our chance to play under the sun.  And with this heat, many of us are dying to hit the beach, get wet and play with water.  While many have started with and others are planning to do their water adventure, I on the other hand remembered my recent trip to a cold country.

For someone born in a tropical island, I am used to the kind of weather we have, rainy from June to November, cold from December to February and summer from March to May.  However the idea of playing with snow is something that has intrigued me.  It's not that I want to let go of our tropical weather but I was just looking forward to experiencing something new, like the winter season.  Although it's a fantasy I kept, I really never dwelled into details and really planned for it.

But as you have read my Japan Naman post, you could have probably known that the good news I received from the start of the year made me realize this dream.  Yes folks, I got the chance to experience winter, and snow, for the first time.  And it was in Japan!  :)


Upon arriving in Tokyo, the moment we went out of the airport, I already felt the very cold wind.  But as much as we both enjoy and endure the winter time, we were told it doesn't snow in Tokyo.  But our tour guide Celeste made us feel good by announcing that if the weather is okay, we will be going to Mount Fuji to experience our first snow!


And on our second day, after shopping at Gotembe Premium Outlet and having lunch and sight seeing at Lake Sahi in Hakone, our bus proceeded to the road going to Mount Fuji!  The ride is about 1 1/2 hours so we had the chance to chat, talk (both personal and work hehe), take photos and get a power nap!

As we went on the trip, when I woke up after taking a power nap, I slowly noticed some white thing covering the road side and coating the top of some plants and trees.  Surprised and amused, I suddently shouted, "Snow!  Snow!  There's snow!" .  And everyone else in the bus looked at the window and shouted as well!  We were very happy and excited!.  We took photos and fixed our sight to the snow.  I guess this is the same feeling when someone from a cold place sees our fine beaches for the first time!  :)  We were just like kids who took our inhibitions away!


Celeste shared that there's a popular saying in Japan.  It says, "Go through life without ever climbing Mt. Fuji and you'll end your life as a fool. Climb it twice on the other hand makes you an even bigger fool."  She said that climbing Mount Fuji is really an impossible mission but every Japanese should at least do it once in his life.  And since it's that difficult, once is enough, she candidly told us.


And the moment we went off the bus, we ran towards the snow!  We played, we took photos, we laid down, we threw snow balls to each other, we ran.  It was just a moment we seized and enjoy!  It was winter and it was cold, but we were warmly welcomed by the snow of majestic and beautiful Mount Fuji! :)


And as we went back to our bus and bid goodbye to Mount Fuji, I realized one thing.  We don't have snow but we shouldn't feel bad about it.  There are things we have that other countries' don't and vice versa.  Well, I think God created the world that way.  We don't have everything we need and want so we can interact with other nations, share the gifts of our world, and be friends  and brothers / sisters with one another.  The world is created that each nation should become interdependent with each other.  And from nations, that goes for humans too.  Each human doesn't have everything he needs and we should be interdepenent with each other.  God is just wise to create the world that way.  As an old saying states, "No man (or nation) is an island". 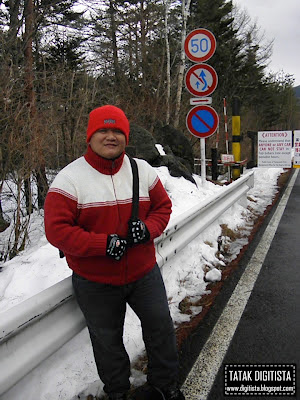 So we may not have snow, and others may not have powder like beaches, but it shouldn't end there.  We are not just citizens of our respective nations, but of the world. Everyone has the chance to see and experience the different wonders that Earth can offer. 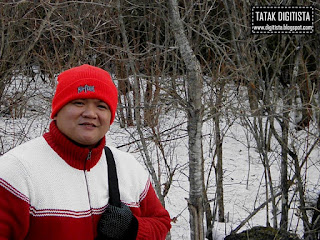 Note:  The following day, we witnessed a few snow drops in the city, at Akihabara in Tokyo.  At first, we thought it's artificial but upon seeing the drop and realizing it's not just falling in one place, then we were convinced it's snow right in Tokyo!  And like manna coming from heaven, we felt blessed to have experienced it there where snow is not expected.  :)