POTATO ON THE GO REVIEW (Theater):

Annie.  Phantom of the Opera.  Les Miserables.  Cats.  Rent.  If you love theater, I bet you know these titles and would want to see these masterpieces over and over again.  But do you know that you can watch all of them plus a lot more in just one sitting, in just one play?  Yes, you're reading this right.  It's possible, well, you may look at it that way, through Forbidden Broadway, New York's smash-hit musical revue! 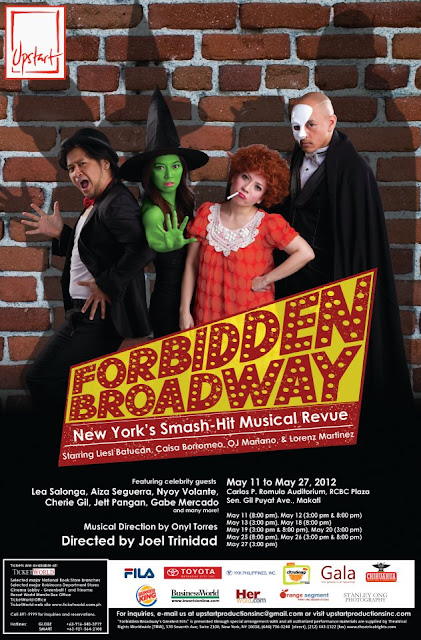 Forbidden Broadway is a hilarious spoof of  popular Broadway musicals such as the titles mentioned above.  And with that, the play brings us back to our well loved plays through the years, but in a different way... in a funny, outrageous way!  This is what I witnessed at the press preview of Forbidden Broadway at the Carlos P. Romulo Auditorium in RCBC Plaza.  The play was directed by Joel Trinidad (from the hit monologue "Caveman") and produced by Upstart Productions (same team that brought us the successful Breakups & Breakdowns and Crush Hour).

Lyrics are brilliantly written not just to fit to the melody of each featured song, but to bring out the parodies that artists make to themselves!  :)  The play was hilarious and each scene can really make us fall from our seats!  But while we were made laugh, the effective use of the signature songs of the musicals featured in Forbidden Broadway gave us a wonderful ride to our well loved Broadway classics.

This is the 30th year of Forbidden Broadway and it's really good that Upstart Productions has brought this priceless production in Manila for everyone to see and enjoy!  Though we are brought back to spectacular theater productions, Upstart did not need to recreate the stage as it creatively used th set and effectively maximized the stage to establish the setting of each musical.  The main components of the stage, the piano and the pianist!), the dressing room and the elevated platform, plus the left and right exits were enough to create that environment.  And with the outrageous costumes, the audience were able to easily identify what each featured musical is!

And of course, the major mover of the show is no less than the cast who are four of our country's most amazing theater actors, Liesl Batucan, Caisa Borromeo, OJ Mariano and Lorenz Martinez!  I love their brilliant acting, their magnanimous vocal range and of course,  their one of a kind humor!  Lorenz was genius in Cats, OJ was super funny in Phantom of the Opera, Caisa impressed me with her vocals and humor in Wicked, and Liesl moved me and at the same time made me laugh loud in Les Miserables!  I like many scenes but what really struck me the most and became my big favorite was Annie!  I don't know if the reason is that Annie is very dear to me (to our family actually) but I found this part as the funniest.  It was just Liesl, armed with the hilarious spoofed lyrics, giving a powerful comic performance.  I just love it!  Well, there are tons of hilarious moments in Forbidden Broadway and for sure you'll have your own pick as well.

Oh before I forget, the pianist Heliodoro "Dingdong" Fiel II was also spectacular.  I'll zip my mouth for now but as a teaser, you're up for a funny surprise!  :D  Aside from this dream cast, some actors are also doing a cameo performances.  For the press preview, we were made laugh by Noel Trinidad! :D  For the other shows, watch out for Aiza Seguerra, Cherrie Gil, Gabe Mercado, Jett Pangan, Lea Salonga and Nyoy Volante.

And from a scale of 1 to 10 claps, I'm giving Forbidden Broadway a strong 8!  Whether you're into theater or not, you will surely like this musical!  :)  Kudos to Upstart Productions, Director Joel Trinidad, Musical Director Onyl Torres and the rest of the production team!

You can catch Forbidden Broadway from May 11 to May 27, 2012 with shows on Fridays and Saturdays at 8:00 PM and matinee shows on Saturdays and Sundays at 3:00 PM at the Carlos P. Romulo Auditorium, RCBC Plaza, Sen. Gil Puyat Ave., Makati City.