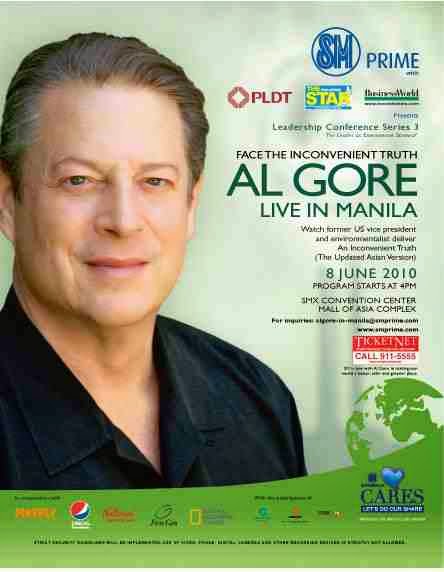 It’s for real!  And I think many people, like me, are excited as former US Vice President and environment advocate Al Gore will finally have a visit in Manila very soon.

SM Prime Holdings announced today that the third staging of the Leadership Conference Series featuring Al Gore will now be held on June 8, 2010 to serve as a fitting culmination to the company’s activities in celebration of World Environment Day.

To be held at the SMX Convention Center at Mall of Asia, Part 3 of the Leadership Conference Series will have Gore present an Asian version of An Inconvenient Truth, the provocative multi-media presentation on the threat of climate change and solutions to global warming and the subject of the movie of the same title, which has won critical and box-office acclaim. The Academy Award-winning film is already considered one of the top documentary films of all time.

A Nobel Peace Prize Laureate, Vice President has just published Our Choice: A Plan to Solve the Climate Crisis, his latest book which gathers in one place all of the most effective available measures that will help solve the climate crisis.

Tickets to Leadership Conference Series 3 will be made available soon thru TicketNet. For more info call TicketNet at 911-5555 or email algore-in-manila@smprime.com.
Posted by foydi at 6:01 PM