In the 4th installment of the hit family movie franchise, Ice Age's Manny, Diego, and Sid-embark upon their greatest adventure after cataclysm sets an entire continent adrift in “Ice Age 4: Continental Drift.” Separated from the rest of the herd, they use an iceberg as a makeshift ship, which launches them on an epic seafaring quest. Manny and the gang are challenged like never before to become heroes and do the impossible, as they encounter exotic sea creatures, explore a brave new world, and battle ruthless pirates. And Scrat's reunion with his cursed nut catapults him to places no prehistoric squirrel has gone before.


MANNY (Ray Romano) As the world shifts around him, so does Manny’s family. Manny’s tendency to be overprotective spurs a terrible argument between him and daughter Peaches - just before Scrat splits the world apart, casting him out to sea and separating him from his family and herd. Now he vows to do everything he can to get back to his family and make amends with his daughter. 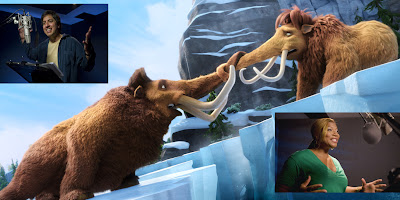 ELLIE (Queen Latifah) When Manny, Diego and Sid are separated from the herd, it’s up to Ellie to take her husband’s place as the leader and help everyone find safe ground. She also must temporarily parent Peaches alone. Ellie remembers what it was like to be a teenager and understands her daughter’s first crush. But she must remind Peaches not to try to change to be accepted and be proud of the fact that she’s part possum.

PEACHES (Keke Palmer) With possums for uncles and two offbeat parents in Manny and Ellie, Peaches has grown into an adorable quirky teenage mammoth with a mind of her own. She’s experiencing her first crush on a cute mammoth named Ethan, but has yet to see that he’s the wrong guy. Peaches longs to prove to Manny that she’s no longer a baby, and can make good decisions on her own. With Manny gone, she and her mother have to lead the herd.

SID (John Leguizamo) Sid is excited when his long lost relatives arrive, seemingly happy to be reunited with him. But they leave just as quickly as they came, intentionally ditching his crotchety GRANNY. Granny is inadvertently swept out to sea with the trio, making Sid’s job surviving the adventure that much harder when he must take care of her every need along the way. 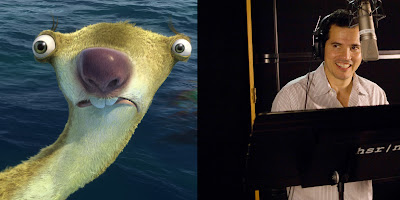 DIEGO (Dennis Leary) Diego is at the top of his game and ready to help Manny with the adventure at hand. While at sea, Diego meets a female saber tooth pirate named, SHIRA, and begins to have a strange new feeling – love. Diego invites Shira to join the herd. But when she is unable to leave her life as a pirate, and he is forced to leave her behind, he wonders if he’s made the biggest mistake of his life. SCRAT (voice/squeaks by Chris Wedge) When Scrat finds a treasure map, he becomes a world explorer and embarks on his biggest adventure yet. Classic Scrat comedy ensues as Scrat painfully searches for the greatest nut treasure in recorded history.

SHIRA (by Jennifer Lopez) Lightning fast on her feet and equally quick-witted, this beautiful saber tooth pirate has become Gutt’s loyal first mate. After Diego and Manny capsize Gutt’s ship, Shira gets separated from the pirates and is shocked to discover that Gutt has no real loyalty to her. When Diego appeals to her join his motley crew, she has to make the decision to stick with Gutt or to join Diego, Manny and the herd.

ETHAN (Drake) Teenage Mammoth heartthrob, Ethan is the object of Peaches’ first crush. He hangs out with the cool kids and is mildly amused by Peaches’ attention. At first Peaches is determined to do anything necessary to catch Ethan’s eye, but eventually she realizes he is more shallow than cool.

LOUIS (Josh Gad) Peaches’ best friend is this soft-spoken, slightly nerdy molehog who is always dutifully by her side and eager to help, even if is to help her get closer to pretty boy Ethan. When Peaches’ heart is ultimately broken by Ethan, Louis secretly wishes she could see that he’s the one who adores her just as she is.

SID’S GRANNY (Wanda Sykes) Sid’s crochety grandmother becomes a large part of the adventure after accidentally stowing away on the barge with Manny and the gang as they head out to sea. Extremely near sighted and highly opinionated, (a comedic combination) Granny causes loads of trouble for Sid and the guys, especially when she wanders off looking for her thought-to-be deceased pet, Precious. 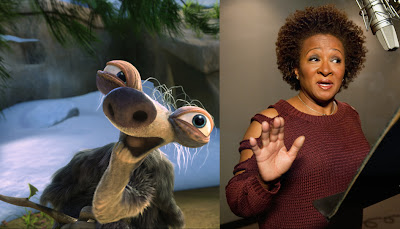 CAP’T GUTT (voiced by Peter Dinklage) A prehistoric orangutan, Captain Gutt is a massive brute of a pirate who has taken advantage of the chaos caused by the Continental Drift to become the self-appointed Master of the Seas. Whether he’s swinging through the rigging, leading his pirate crew in a shanty or just being an all-around badass dude, Gutt absolutely loves being a pirate and taking whatever he wants in the world. But when Manny and his crew steals his ship and the bounty he has amassed, Gutt’s wrath knows no bounds and he becomes determined to find Manny and get revenge.


FLYNN (Nick Frost) Flynn’s a 4000 pound English elephant seal with a heart of gold and a head of sand. He’s as passionate about being a pirate as he is clueless. He doesn’t know his port from his aft – and almost never remembers that being a sea creature means he can swim. However, he makes up for what he lacks in intelligence with an abundance of enthusiasm. Whoever coined the phrase “ignorance is bliss” clearly met Flynn first.

RAZ (Rebel Wilson) This tough, prehistoric Aussie Sheila kangaroo, is the crew’s resident weapons expert, hiding an arsenal of deadly bone swords in her pouch. Don’t mess with her….she’s just looking for a reason to party, and by party she means fight till you drop.

SQUINT (Aziz Ansari) Squint packs an amazing amount of crazy into his diminutive, prehistoric rabbit frame. If he were more than three feet tall and his adorable bunny ears didn’t always seem to pop up when agitated, he might genuinely be terrifying. His two great passions are his bone knife and unprovoked acts of violence.

SILAS (Alain Chabat) Perpetually perched on Capt. Gutt’s shoulder, this bird from the south of France packs a surprisingly dangerous airborne punch when he’s not scouting out trouble ahead.