The world over witnessed when a Blue Macaw named Blu domestically grew up with his companion Linda who never learned to fly in the global blockbuster “Rio” from Blue Sky Studios. Blu is voiced by Jesse Eisenberg and reprises his voice act in “Rio 2” where we see him comfortably living in the city with his own family within Linda’s home. 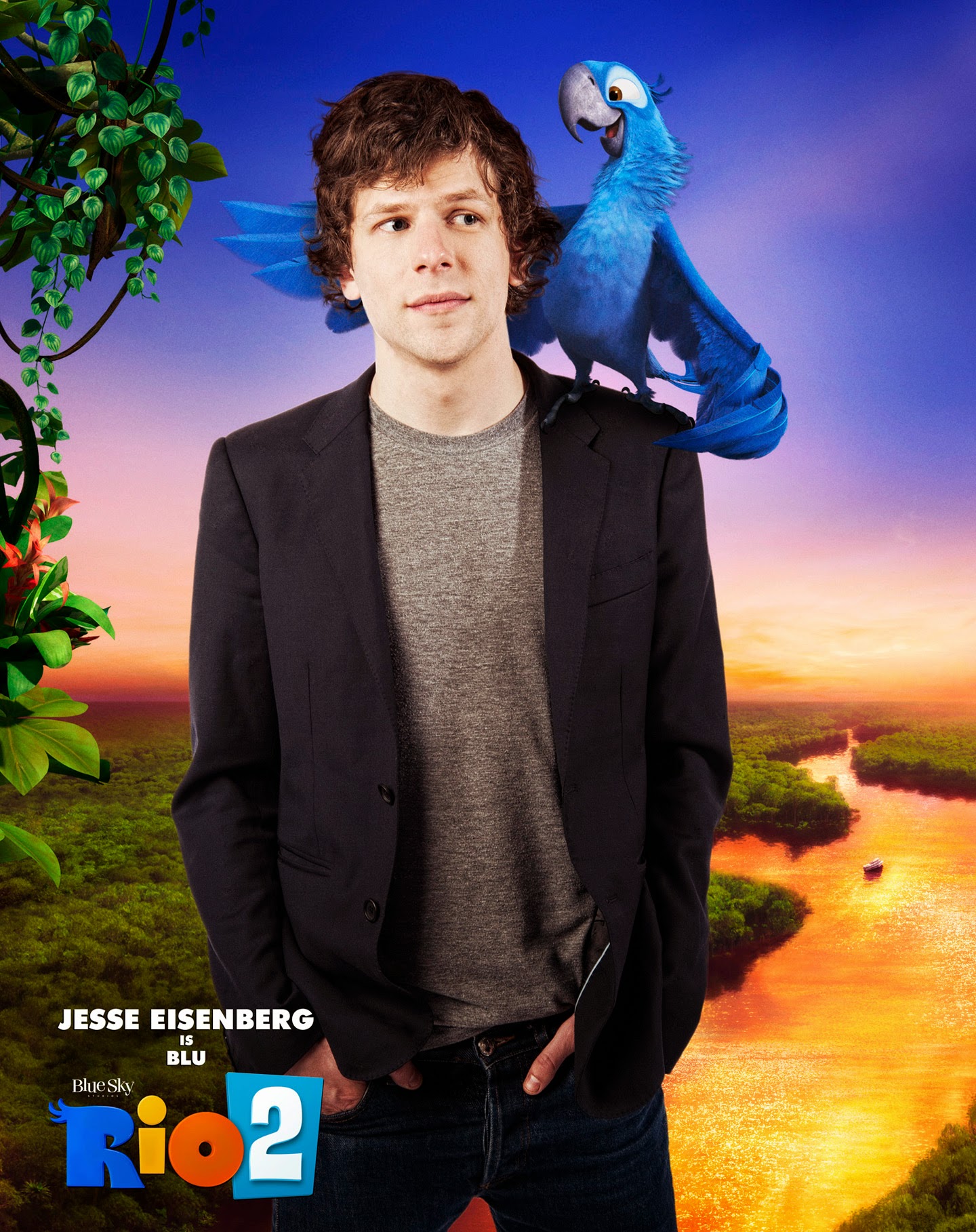 In “Rio 2,” Blu spreads his wings wider, farther and higher as he and his family, along with their friends Luis, Pedro, Nico and Rafael, take a trip into the Amazon. Jewel (Oscar winning actress Anne Hathaway) and Blu (Oscar nominated Jesse Eisenberg) are now living happily in Rio, with their three kids. It’s a life that suits the thoroughly domesticated Blu, who only discovered he could actually fly in the first film. He enjoys nothing more than human comforts: TV, iPhones and pancakes for breakfast. Jewel’s heart lies in the wild though. This beautiful and feisty bird feels that Blu and the kids are becoming complacent and accustomed to their human comforts. In her mind, birds are meant to be wild and free.

On hearing the news from Blu’s human friends, Linda (Leslie Mann) and Tulio (Rodrigo Santoro) that they may not be the only birds of their kind, Jewel decides that the family should take a trip to the Amazon, search for others of their species, thought to be almost extinct, and learn to live in their natural environment. Less than happy at the prospect of leaving behind his home comforts, Blu agrees and they embark on an expedition to the Brazilian rainforest.

Director Carlos Saldanha returns to Brazil and reunites his beloved characters In “Rio 2,” where it’s a jungle out there for Blu, Jewel and their three kids, after they’re hurtled from Rio to the wilds of the Amazon. As Blu tries to fit in, he goes beak-to-beak with the vengeful and villainous Nigel, and meets the most fearsome adversary of all…his father-in-law.

Hurtled into the wilds, full of lush foliage, strange animals, dazzling flowers, Brazil nut trees, butterflies, and of course fabulous birds, the adventurers discover an entire flock of Blue Spix Macaws in a wonderful rainforest sanctuary. Incredibly, Jewel is reunited with her dad, Eduardo, voiced by Oscar nominated actor Andy Garcia, her Aunt Mimi, played by Rita Moreno and her childhood pal, the charismatic and overachieving Roberto (Grammy award-winning musician and producer Bruno Mars) who happens to be a great singer! While Jewel and the kids are thrilled, Blu feels like an outsider.

Blu is worried he may lose the love of his life, and the kids in the jungle. All he wants to do is get everyone back to Rio as fast as possible. “Blu has gone from being a domesticated city bird to being back in his natural environment,” says animation supervisor, Jim Bresnahan. “The stakes of going wild have been raised and he has a whole new set of obstacles to face. He will always be a domesticated bird at heart, but he has to deal with the wild. Jewel also has a conflict: Does she do what Blu wants? Or does she follow her heart, which is in the wild, even though she knows Blu isn’t comfortable there? That’s the conflict we explore in the movie. It’s more wild, and it’s fun.”

Blu is a little reluctant to make the journey, and for good reason: “In the first film, Blu thought the city of Rio was wild, but he hasn’t experienced the true meaning of wild until he travels to the Amazon,” Saldanha explains. “It’s a big trip for Blu and Jewel and the children. He’s not comfortable with it, but he’ll do it for the good of his family.”

Additionally, “Blu is concerned about raising the kids in this environment, because it is Jewel’s side of the family, and he is not part of it,” adds Carlos Saldanha. “So he asks: how is that going to work out? He had thought he had it all under control, under his wings, but now he has to fight for his family and living in the wild is not his idea of home.”

“The filmmakers and Carlos set a high bar with ‘Rio,’ but they’ve just blown the sky open with RIO 2!” exclaims Hathaway. Adds Eisenberg, who recently made headlines with the announcement of his casting as super-villain Lex Luthor in the “Man of Steel” sequel: “Rio 2 doesn’t feel like an extension of the first film; it’s something totally different. And I love playing Blu because he’s such a funny and sweet guy.”

“Rio 2” in 2D and 3D opens April 9 (Saturday) in more than 100 screens nationwide from 20th Century Fox to be distributed by Warner Bros.