Choose a leader who promotes gender equality and women empowerment -- Miriam Quiambao on MDG No. 3 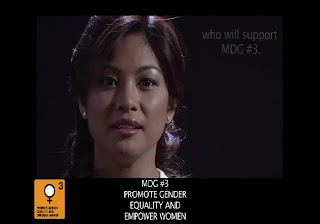 Miriam Quiambao on MDG No. 3


I believe that in a society where oppressive social standards put our women at a disadvantage, candidates this coming election should be serious and committed in putting MDG No. 3 in their priority goals.

A recent national survey estimated that around 2.2 million Filipino women or nine percent of all women ages 18 years and above, experienced violence inflicted by their partners. In the past two years, around 70 percent of child-abuse victims were girls and about 40 percent of cases were sexual abuse and exploitation.

The Philippines is also recognized as a source, transit, and destination country for cross-border trafficking of women and children for sexual exploitation and forced labor. It is estimated that between 60,000 to 100,000 children and over 100,000 women are trafficked (internally and externally) annually. Since the passage of the Anti-Trafficking in Persons Act of 2003, the number of cases filed for investigation and prosecution by the Department of Justice (DOJ) had steadily increased from 12 in 2003 to 114 cases in 2005. There had been eight (8) convictions since 2003.

Women had a large presence in the growing informal economy and had limited benefits and protection, such as social security and health care. Moreover, their economic contribution was largely invisible. As a country with the highest number of Overseas Filipino Workers (OFWs) worldwide, women and men were almost equal in number. The national economy and a quarter of the country’s families were highly dependent on OFW remittances.

However, the average cash remittances of women were only 60 percent that of men. This is indicative of the status of women OFWs in lesser skilled and often unprotected lower paying jobs. This renders women vulnerable to exploitation, trafficking and abuse. Of particular concern is that 72 percent of newly-hired OFWs in 2005 were women, indicating lack of opportunities locally for decent work and livelihood to provide for themselves and their families.

On civil and political rights of women, the Philippine Constitution upholds the right of women to sectoral participation in national and local legislative bodies. The Philippines is one of the few countries with a woman President. Four out of 24 senators are women. Women dominate the civil service at the technical level (74%) but are still largely outnumbered by men in decision-making positions (35%). Women account for only 20 percent of total positions in the judiciary. In the 2004 elections, mean participation rate of women was 18.2 percent at the national and local levels of both executive and legislative bodies.