Comedy Bar in TV? Are they crazy? Yes, they are indeed crazy... and funny! =D

Potato On-the-Go:
Saturday night is usually a major writing / blogging night for me as broadband connection at home is very strong at that time. =)  While I was writing and editing my posts, a new show caught my attention.  The new show I'm talking about is Comedy Bar in GMA 7 hosted by Allan K and Eugene Domingo and directed by Dominic Zapata. 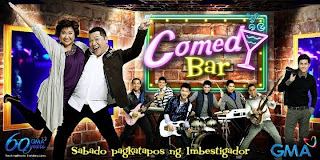 Comedy Bar's billboard
Initially I was intrigued on how a "comedy bar" concept can be translated in free TV since humor in comedy bars is usually "for adults only".  Well, they might say that it's on a Saturday night and minors should not be awake at that time but I don't think that's true for all homes, especially in Mega Manila and other key cities in the country.  Some may say not all comedy bars are not the usual comedy bars we know but given that Allan K and Eugene Domingo are the hosts, it's obvious that what we are talking about are the likes of Klowns, Zirkoh, Laffline, Punchline and Library. 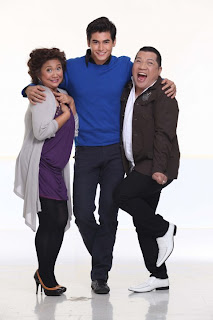 
Well, so much for the preamble, all I can say is I enjoyed the show!  Eugene Domingo and Allan K were wacky but prolific hosts and of course, they perfectly fit the concept and format of the program.  Comedy Bar was able to make a little wholesome version of the comedy bar we know.  Yes, I think that's how far they can go, to play on the double meanings since they won't be allowed to go hard core on green jokes! =D  Their band is called Six Foot Long and their sexy waiters and waitresses are named Beergins!  The segment with celebrity guests Jay-R, Julia Clarete and Bayani Agbayani was also fun.  They were made to sing with Allan K and Eugene Domingo when prompted but they were only allowed to sing the word given to them -- talong for Bayani, pechay for Julia and dila for Jay-R.  So could you imagine how the double meaning was strategically played in the game? Well, it's fun. =) 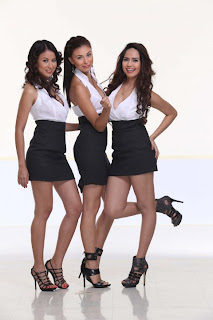 The female Beergins
The studio really resembles a comedy bar and to further bring the bar setting, the Beergins actually served food and drinks (but I hope this will not just be for the premiere telecast) and there were song requests.  They also called audience members to the stage but don't expect for the normal "okray" (hybrid of a joke and insult) we witness in live comedy bars.  Well, what they can do, the MTRCB, I think, for sure is closely monitoring them.  And I think this limitation in TV would still keep live comedy bars as part of the yuppies' night outs itinerary. 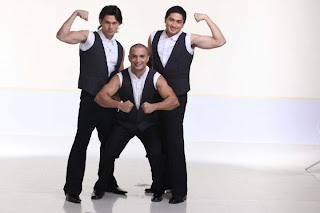 
Guest La Diva brought the serious entertainment in the house and as expected they gave another jaw dropping performance.  Another welcome treat  in the show is the opportunity they give to amateur stand-up comedians.  Brazilian model Fabio Ide is a good catch and his barok Tagalog is somehow funny but it should always be played up by Allan K and Eugene or it will bring dead air.  The Six Foot Long band is an awesome show band too.

I think what should be improved are the scenes with the male Beergins, they need proper cues as they look unprepared especially in the scene when they carried a guest who's celebrating his birthday,  Eugene Domingo's singing (she is great in comedy as always but I heard more of Allan K in singing), and better selection of contestants / amateur comedians.  The first one was good but I found the second one a disappointment.  And they should take easy on Fabio, what heats up the interest of the audience is the "teasing", so the hosts should do it gradually.  I also suggest that other professional comedians will also be guested every week to add flavor to the show.

In general Comedy Bar is fun and shows a lot of promise.  It is a good new concept  for television, not just another localized version of a hit idea in the west.  From a rating of 1 to 10, I'm giving it a 7.

Good job to Dominic Zapata, Allan K, Eugene Domingo, Chito Francisco and the rest of the talents and production staff.  Keep it up! =)
Posted by foydi at 4:57 PM