Curse with no end;  Chain of death;  Cycle of horror;  A woman in white with face covered with long hair...  If you are a horror movie fan, you must know by now who or what I am talking about!  Yes, she started it all, the craze that took the country by storm and influenced Asian horror cinema!  Sadako, from the hit horror movie The Ring, is back bringing the stuff nightmares are made of in this 3rd installment of The Ring franchise that will open exclusively at SM Cinema on August 8. 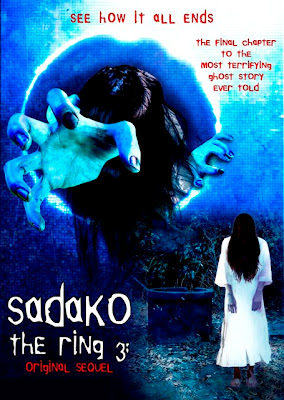 In The Ring 3: Sadako evil is again on the loose as a cursed videotape finds its way into the hands of a student. The focus of the story is Akane, a high school teacher who hears a rumor from her students that there is actual footage on the Internet of someone's suicide. The footage is said to drive anyone who sees it to also commit suicide. Akane does not believe the rumor at first, but when one of her female students dies after viewing the footage, she and her boyfriend Takanori are fatefully drawn into the horror that has been created by the man who appears in the suicide footage, Kashiwada. Kashiwada's intention is to create chaos in the world by bringing back Sadako and the power of her curse. Now Akane has to fight against Sadako and Kashiwada to save the lives of herself and Takanori.

The Ring 3: Sadako is directed by Tsutomu Hanabusa, and was based on the novel "S" by the "Ring" original creator Koji Suzuki. The cast includes Satomi Ishihara, Ryosei Tayama, Yusuke Yamamoto and Koji Seto. The Ring franchise has shown much strength in its movies as the first installment, directed by Gore Verbinski (the Pirates of the Caribbean films) and starring Naomi Watts, earned an impressive $249.3 million worldwide in 2002. And in its sequel, The Ring Two directed by Hideo Nakata, Watts reprised her role and earned $161.5 million in 2005.

SM Cinema is the country’s leading film exhibitor with a total of 236 cinemas in 43 branches nationwide. SM Cinema is also proud of its IMAX Theatres in the Philippines, namely, IMAX Mall of Asia, IMAX Southmall, IMAX North EDSA and IMAX Cebu.

Watch it best at SM Cinema and for a more convenient way of getting your tickets; experience the newest from SM Cinema – the CINEMOBILE: Your mobile, your movie ticket. Have your movie tickets delivered to your mobile phone only through www.smcinema.com.

Enter SM Cinema’s theaters with their turnstile system, their newest innovation to deliver a more convenient movie-going experience to its patrons.