Carey Mulligan sizzles the screen in THE GREAT GATSBY 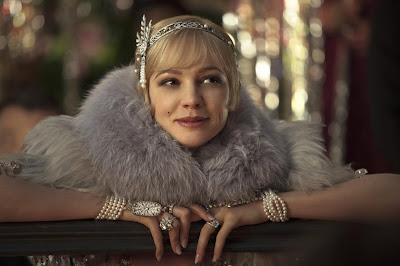 Daisy is the phantasmal object of Jay Gatsby’s (Leonardo DiCaprio) obsessions, ethereal and completely captivating, especially her voice, “the kind of voice that the ear follows up and down as if each speech is an arrangement of notes that will never be played again,” as author F. Scott Fitzgerald describes her in the novel from which the film was based.

Daisy is Gatsby’s “green light,” his “enchanted object” beckoning from across the bay, but forever out of reach, “high in a white palace the king’s daughter, the golden girl…” 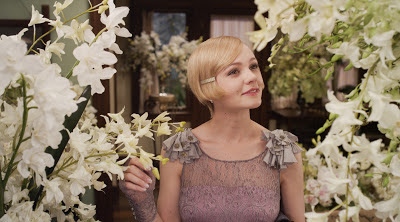 “The Great Gatsby” follows would-be writer Nick Carraway (Tobey Maguire) as he leaves the Midwest and comes to New York City in the spring of 1922, an era of loosening morals, glittering jazz, bootleg kings, and sky-rocketing stocks. Chasing his own American Dream, Nick lands next door to a mysterious, party-giving millionaire, Jay Gatsby, and across the bay from his cousin, Daisy, and her philandering, blue-blooded husband, Tom Buchanan (Joel Edgerton). It is thus that Nick is drawn into the captivating world of the super rich, their illusions, loves and deceits. As Nick bears witness, within and without of the world he inhabits, he pens a tale of impossible love, incorruptible dreams and high-octane tragedy, and holds a mirror to our own modern times and struggles.

Carey Mulligan offers, “The main thing about Daisy is her duality. She wants to be protected and safe and live in a certain way. But, at the same time, she wants epic romance. She’s just swayed by whatever is the strongest and most appealing thing. She’s not a grounded person or a genuine person, in a way.”

When we first meet Daisy, she is at a somewhat melancholic juncture in her life. Once a much-admired Southern belle, she’s still very charming and beautiful, but she’s sadly aware that her husband is a serial and unapologetic philanderer, prone to “sprees.” It is thus, when Nick reintroduces her to Gatsby, her lost love of five years ago, that she is tempted into a return to the past.

Director Baz Luhrmann took his time to find the right actress for the part. “I don’t think it’s an exaggeration to say that every actor you can imagine was keen to play that part; it’s one of the great, iconic roles. So we found ourselves in somewhat of a ‘Gone with the Wind’ situation, where we were exploring all the possibilities, not so much as auditions but as little rehearsals.” “We did a big, wide net of a search for Daisy, which is the old-fashioned Hollywood way,” echoes producer Lucy Fisher. 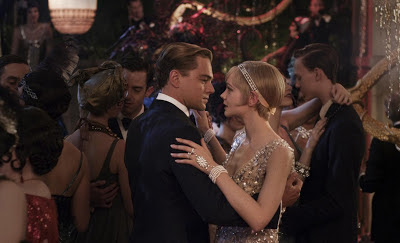 “Leonardo was a constant partner in this search,” says Luhrmann, who immediately solicited his reaction after Mulligan read for the part. “Leo said the most brilliant thing: ‘You know, I’ve been thinking about it… Gatsby has had a lot of very beautiful women thrown at him. Carey’s very beautiful, but she’s also very unusual. Daisy needs to be sort of precious and unique and something that Gatsby wants to protect. Something that he’s never experienced before.’ We looked at each other and said, ‘It’s her.’”

“We knew we’d found our Daisy Buchanan,” DiCaprio recalls of that moment. “Daisy is such an incredibly important character in the film. She has to be a combination of the beautiful innocence that Jay sees in her, but she also has to have that whimsical carelessness. It takes not only a very intelligent actress, but also someone who can do both of these things simultaneously.” 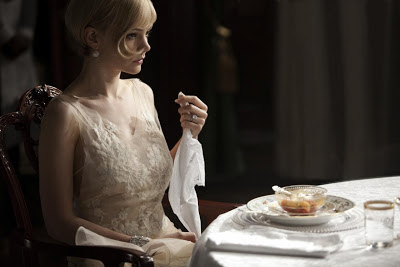 It turns out that Mulligan was equally impressed by DiCaprio. “I remember the first audition that I had,” she says. “We were doing a scene right towards the end of the film, and Leonardo was playing Gatsby, and he was playing Tom Buchanan, and Nick Carraway. So, he’d sit in one chair and play his character, then he’d jump in another chair and play Tom, and then be standing up and he’d be Nick. He was learning all the different lines. He was incredible.”

Mulligan portrays Daisy as complex, more than just a vacuous heroine. “I think that when Daisy says something, she really means it, but five minutes later she might not mean it at all,” Mulligan observes. “She’s almost living in a movie in her own life, looking in on herself, which makes for a rather thin personality that was probably typical of women in her circumstances, and interesting for me to play.”

Opening across the Philippines on May 17 in Digital 3D and regular format, “The Great Gatsby” will be distributed by Warner Bros. Pictures, a Warner Bros. Entertainment Company.