He has endeared himself to worldwide audiences by playing Alan, the mayhem-causing member of the Wolfpack. Now, comic actor Zach Galifianakis reprises the eccentric character for the last time in Warner Bros.’ male-oriented comedy “The Hangover Part III,” the epic finale of the hugely successful franchise.

In the film, the only member of the Wolfpack who’s not content is Alan. Still lacking a sense of purpose, the group’s black sheep has ditched his meds and given into his natural impulses in a big way—which, for Alan, means no boundaries, no filters and no judgment—until a personal crisis forces him to finally seek the help he needs. And who better than his three best friends – Phil (Bradley Cooper), Stu (Ed Helms) and Doug (Justin Bartha) -- to make sure he takes the first step? This time, there’s no bachelor party. No wedding. What could possibly go wrong? But when the Wolfpack hits the road, all bets are off.

“The guys, led by Doug, who is Alan’s brother-in-law as well as his friend, stage an intervention in the hopes of getting him into a facility where he can get some help and put his life in order,” says director Todd Phillips. “Knowing he can’t do it alone, Doug enlists Phil and Stu. So it’s helping Alan that brings the four of them together.” Naturally, Alan is resistant, but he finally gives in to the irresistible promise of a road trip with his three best friends. “Alan has to be told he’s having a midlife crisis because he’s not aware of it,” Galifianakis admits. “He has no idea. I guess it’s more like a coming-of-age crisis, but it’s hard to come of age when you’re already over 40.”

Unbeknownst to the four of them, though, Alan’s long-overdue bid for mental health coincides with an equally momentous event occurring halfway around the world: Leslie Chow (Ken Jeong) is breaking out of prison, “Shawshank”-style, and, like a malevolent genie freshly uncorked, will waste no time in bringing havoc into the lives of anyone close to him. And no one is closer to him than Alan. 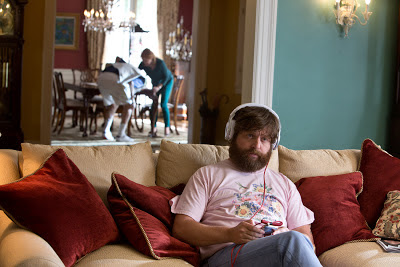 As a result, states Helms, “What starts out as a fairly magnanimous gesture quickly escalates into utter chaos and hell.” Still, Phillips asserts, “If you talk to people who love these movies, they’ll often say they wish they had a friend like Alan, and that’s largely attributable to Zach. He has such sweetness behind his eyes, that he can say and do most anything and you’ll think, ‘Oh, he didn’t mean it like that.’ So he gets away with all sorts of things. People love Alan for his innocence, his big heart, and his ability to just have a good time without worrying about what other people think—which is good, even though he always goes too far and screws it up.”

“It’s kind of bittersweet knowing that, after this, I won’t be able to play Alan ever again. It was a nice run, though,” Zach Galifianakis remarks, considering the persona that has earned a worldwide following and made a significant impact on his own life and career.

Knowing that “people come to these movies not to be enlightened, but to laugh and be entertained,” co-screenwriter Craig Mazin adds, “I think we laugh more when we care, and Todd and I care very much about these characters so we wanted to finish this in a meaningful way, and that meant dealing with Alan.”

Consequently, “The Hangover Part III” nudges Alan onto an inner journey he desperately needs, that runs parallel to the story’s main action. “I hate to suggest he grows up because I don’t know how possible that would be, but something definitely starts to change in him, at a cellular level,” offers Dan Goldberg, Todd Phillips’ long-time producing partner. “This allowed us to mine comedy from the deeper aspects of the characters,” Goldberg continues. “We couldn’t rely on the same things that worked before, either in character or story. Alan has given us a lot of laughs, and this movie is no exception, but there comes a time when you think, he can’t go on like this. What if he was your friend? One element that comes across so well in these movies is that no matter how insane things get, the friendship feels real. You believe these guys truly care about each other. So the question eventually becomes, how could they allow one of their own to continue on such a self-destructive path?”

A presentation of Warner Bros. Pictures, in association with Legendary Pictures, “The Hangover Part III" opens in Philippine theaters on May 29, 2013.